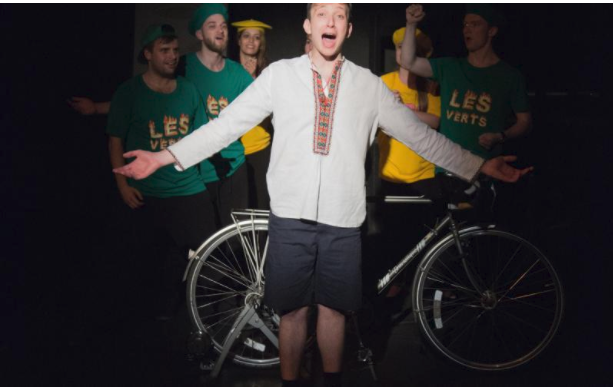 Posted at 16:23h in Events by Kristian 0 Comments

A. Hanna & Sons Pianos are proud to invite you to take place in Pinot! The Musical.

Set in Paris, the story of Pinot! The Musical follows the adventures of Pinot, a young Russian cyclist with a dream – to win the Tour de France! Follow him and his Cossack dancing friends on their thrilling journey! On his way, Pinot meets colourful characters, including a beggar and a bag lady and a clumsy policeman who keeps chasing him. He wins over two rival gangs, procures a racing bike, endures a spell in jail and undergoes gruelling training – learning French along the way! The show’s catchy songs make learning French easy for children of all ages – and you won’t be able to resist singing along!

The story is told in English and there are four English songs in addition to the French songs. French song topics include: the days of the week, the alphabet, the numbers, or the months of the year. The show is designed for anyone with an interest in French, to brush up their skills or learn a few basics from scratch – while having a great time singing along!

The one hour show is written and produced by Marie Atallah, whose inspiration for Pinot! The Musical came from the belief that learning languages enriches lives and should be fun.

In 2010 the show was part of the IYAF International Youth Arts Festival of Kingston upon Thames and since then has been professionally performed at the Lost Theatre, the Mumford Theatre (Cambridge), the Colour House Theatre and New Wimbledon Studio Theatre. School performances and workshops have taken place regularly throughout the UK.