Yamaha’s highly popular ARIUS YDP Series now welcomes four new members into this family of innovative, high-quality pianos. With the introduction of the new YDP-165, YDP-S55, YDP-145, and YDP-S35 you can now look forward to more performance, features and playing enjoyment that stays with you.

FEATURES THAT ELEVATE EVERY PERFORMANCE 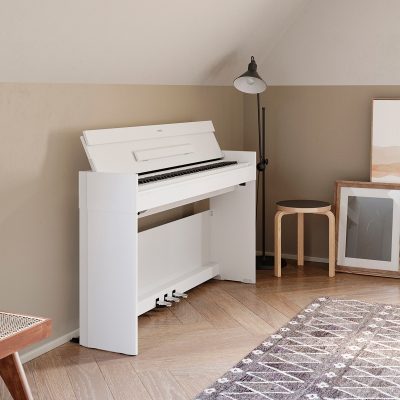 One of their new features is the piano voice sampled from Yamaha’s flagship CFX grand piano — a renowned piano that delivers sparkling highs and a powerful resonant bass combined in a superbly expressive sound.

Yamaha has also introduced a new technology that optimally corrects the sound balance according to the volume you set – giving you an exceptionally natural sound that’s easy to listen to and is gentle on the ears, even when playing for a long time.

The YDP-165 and YDP-145 use a newly developed tone escapement construction on the back of the cabinet that emanates sound from inside the piano. This allows you to experience the natural sound radiation and three-dimensional resonance akin to that of an acoustic piano.

In addition to the authentic grand piano sound, all ARIUS models also feature various other built-in instrument sounds, with a total of 10 Voices – including electric piano, organ, vibraphone, and strings.

THE KEYS TO MORE PLAYING PERFORMANCE

With an 88-key piano action, the GH3 (Graded Hammer 3) keyboard and GHS (Graded Hammer Standard) keyboard reproduce the touch of an acoustic piano, from a naturally heavy feel in the lower keys to a lighter touch in the upper octaves.

All new Arius YDP Series models additionally come with a feature that authentically replicates the damper action of a grand piano. The GH3 keyboard of the YDP-165 and YDP-S55 even provides a grand piano-style response and feel, allowing rapid note repetition and authentic expressive control.

Aside from authentically reproducing the touch of an acoustic piano, all models come with the ground-breaking technology Virtual Resonance Modeling Lite (VRM Lite). This feature makes it possible for an ARIUS model to faithfully reproduce the desired vibration and resonance found while playing classic concert pianos. The result adds a rich, varied sound and depth to any performance.

The new models are due to begin shipping in April and we will shortly be adding them to our website to take advance orders. They are bound to be popular, so please contact us if you would like to reserve your new ARIUS now.

Secure online payments You are safe with us