Music for the Soul – Sally Wave 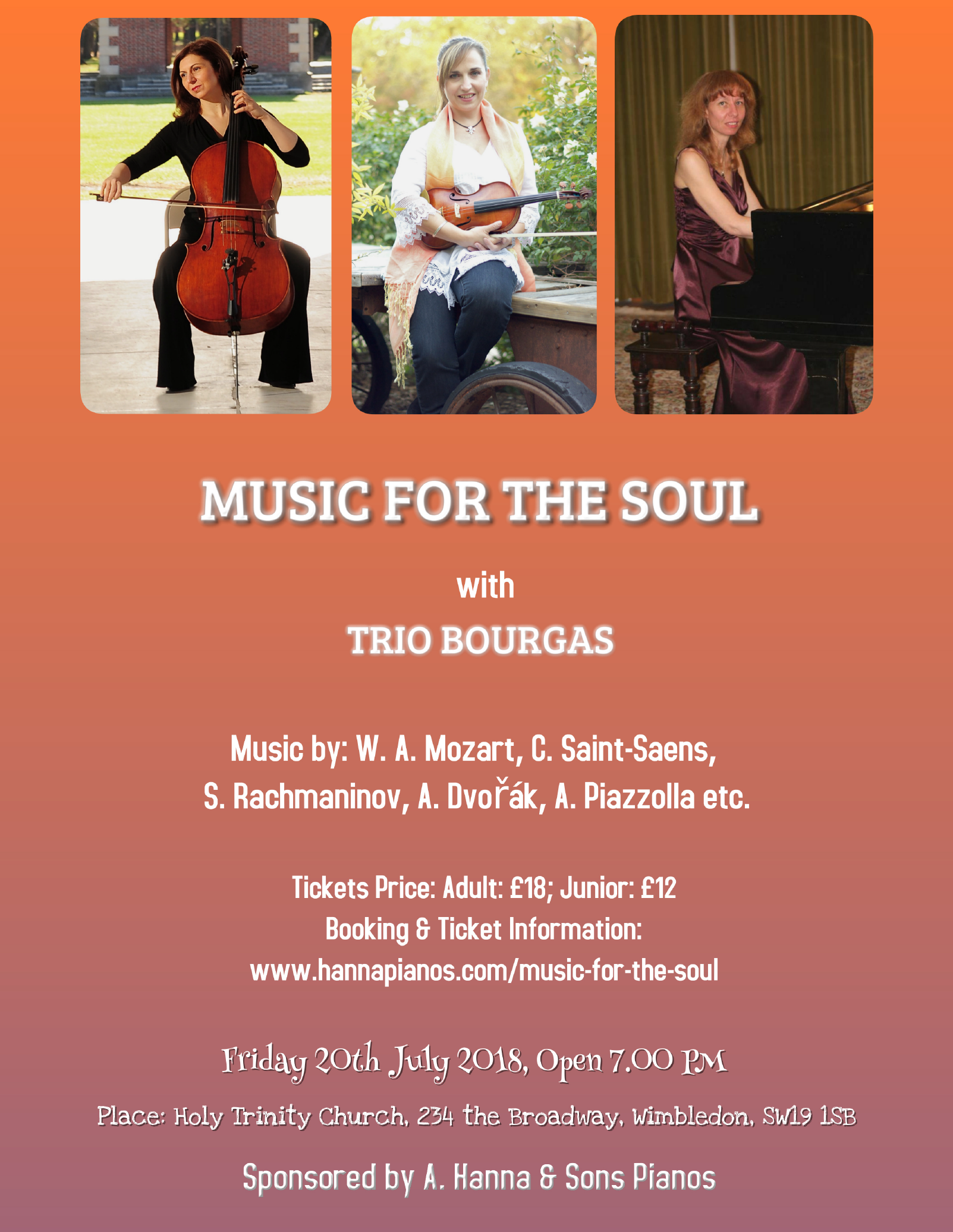 Posted at 17:16h in Events by Kristian 0 Comments

Music for the Soul

Music for the Soul is a wonderful concert by Trio Bourgas sponsored by A. Hanna & Sons Pianos which will be held on the 20th of July 2018 7pm at Holy Trinity Church, 234 the Broadway, Wimbledon, SW19 1SB. The pianist, Sally Wave is one of the adjudicators at the Wimbledon International Piano Competition.

Join us as we stroll along an ancient seaside. As we walk, we listen to the songs of the
waves. They sing of the centuries-old history of this land. A land enriched by diverse and rich
cultures since approximately the sixth century BC. First Thracian, then Persian, later Byzantine,
and by the eighth century AD Bulgarian communities called this land home. Soon we find
ourselves at the Bay of Bourgas.
Today the city of Bourgas evinces a rich cultural tradition and is a birthplace to many
illustrious poets, musicians and artists. Bourgas is a favourite venue for musical festivals in the
summer.
Trio Bourgas grew out of the sand grains on this mesmerising bay. It is here the three performers
whose music you are about to enjoy tonight were born. They were same-year students at the
local music school and have performed together since they were children. They have received
numerous awards, among them an award from the international contest for young musicians in
former Czechoslovakia. After graduating, the three girls continued their education at the National
Music Academy in Sofia, Bulgaria, while continuing to play music together.
Later followed years of independent professional development for the three young women
and, as often happens, life scattered them in different corners of the globe. For a time they lost
touch with each other. Petia and Joy moved to America, Sally remained on the Old Continent,
and they continued their development as professional musicians individually. As the internet
entered our lives and rendered the world a small place, Joy, Petia and Sally found each other
again. They met in their birth city after a separation that had lasted more than two decades and,
naturally, the idea to perform together again occurred instantly. When love for music is the
founding stone of a friendship, this friendship lasts forever, because those who have played
music together have irrevocably entwined their souls. And this is why today the three seaside
girls will perform at the first of a series of European and American concerts to follow.
You are most welcome to join us tonight in order to share the music which binds our souls
together. Welcome to MUSIC FOR THE SOUL